May 2020 Market Update with Miia Kelly

Here’s my monthly market update for the GTA, Whitby and Oshawa. You can watch the video and/or read the script… 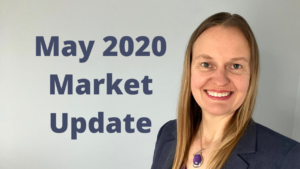 Or read the script below:

Last month was the first full month of the pandemic in Ontario and the statistics revealed significant effects on the market.

The number of home sales in the GTA were down by 67% compared to April of last year. The number of new listings was down by 64.1%.

Interestingly, the average home price was about the same as it was a year ago. Remember, however, that in the first few months of the year, we were seeing average home price increases of 12.3%, 16.7% and 14.5% compared to the same months of the previous year (January, February, and March, respectively), so in April, the price increase of 0.1% indicated a downward trend in prices when we look at them month-to-month.

In other words, prices have dropped slightly since the pandemic hit us, but because they had gone up so much leading up to the pandemic, they have not yet gone below last year’s prices.

According to data collected by BrokerBay, over the last few weeks, the numbers of showings, offers and sales have been gradually creeping upwards again. Not back to normal levels by any means, but I think that a few people are tired of waiting, and that gradually more and more people are re-entering the market.

We might not get back to where we would have been if the pandemic hadn’t hit this year, because some people have probably entirely abandoned their plans of moving this year, but those people who don’t want to wait for the danger of the virus to disappear, which could take years, will find ways to accomplish their buying and selling goals.

Let’s take a look at a recent sale in the City of Oshawa. 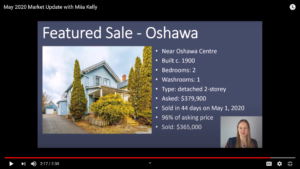 That’s my update for this month. If you have any questions, let me know.